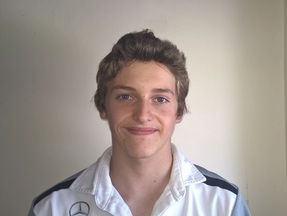 
Goals for 2021:
Most importantly .....to keep learning and having fun
Race in Funcup and defend our championship title
Improve my fitness
Continue working on broadening my skills in other cars

​​Goals for 2020:
Most importantly .....to keep learning and having fun  DONE
Race in Funcup, challenge for the championship in 2020  DONE, DONE, DONE!!
continue working on broadening my skills in other cars.

I used to sit on my Dads lap while he drove his race sim. It was a bit of Dad baby time, with my Dad trying to do a few a laps on the side. I was soon steering while he did the peddles and by the time I was 3 years old I was driving laps of Spa on my own stood up. Its about the only time I right foot braked in my life! Pretty much my Dad lost his sim from then on.

"Hi Riley's Dad jumping in here. When Riley was about 6-7 things started to go a bit wrong at school. He was now away with the fairies, but worse now proper friendships were being forged and banter was happening Riley didn't get it. Other kids realised that Riley just reacted no matter what the situation or who was there. They could sneakily pinch him just as the head master was coming and he would just react. He had no understanding of authority so it didn't matter if you were Miss VIP or the Head Master if he was upset he was upset...  Duly he was expelled rather promptly from school.

It wasn't a great time he was explosive at home and hard to handle and obviously very unhappy. He thought he was useless at everything and the bullying had really effected him. We looked for an outlet somewhere he could find some confidence. We went to Thruxton kart track and joined their training programme for 8 to 14 years olds. (He was still 7 ... well he was soon to be 8). Des the trainer said "He can do this..." I said "I was afraid you were going to say that"... as he won again... But we had our smiling boy back and that was priceless.

Changing to a better school with Head Master Paul Scraffe at the controls Riley was soon on stage receiving karting awards instead of hiding under tables. We owe Mr Scarffe a great deal for rebuilding Riley.

By this time Riley had started racing MSA Honda Cadets in a not very posh second hand kart and had won 4 out of 5 novice trophies. We competed in the NKRA cadet series and came 4th in the National finals. However, Honda's had got a bit crazy and it was all about who could spend the most on an engine with the best being £7000+ there was also quite a bit of cheating going on. We were going to quit.

Riley had joined a new senior school and it was going well all things considered, but the track was where he was alive. We tried out a Mini Max kart and that was it... grinning like an idiot.

So this journey wasn't started out with a loaded set of parents playing mini F1 games it was born out of desperation and a need to find something positive.